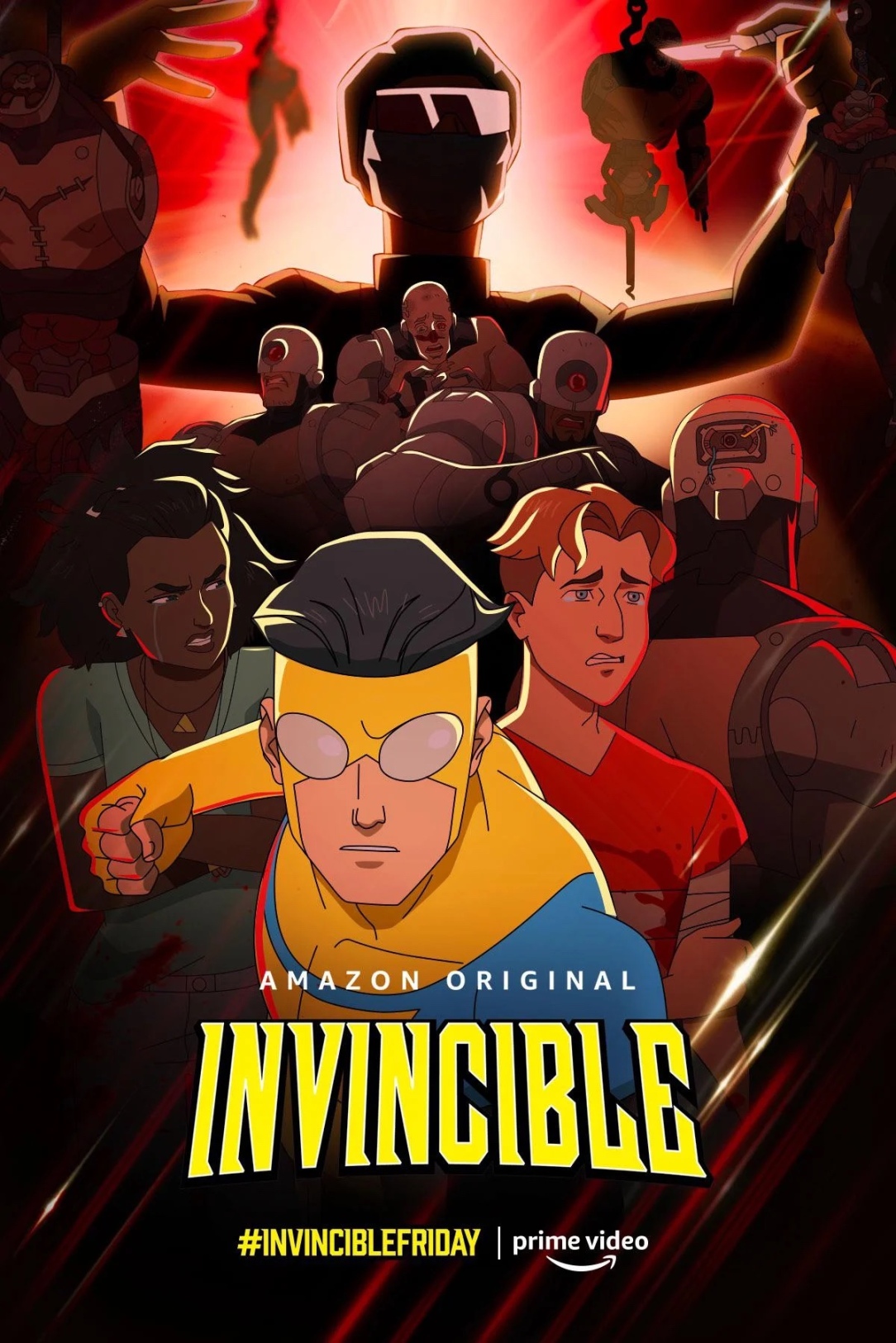 By Eldwin Betances Jr in animation, Film & Television on April 18, 2021
No comments

With only two episodes left, Invincible seems to be headed to the final stretch. With no real questions answered, the last two episodes are for sure going to be incredible. One huge jaw dropper was Debbie finally finding out that her husband, Omni-Man , murdered the original Guardians of the Globe. She was able to find more leads and evidence than Cecil and Darkblood. By finding Omni-Man’s suit, that he wore when he fought the Guardians, all bloody and torn she brought it to Art Rosenbaum ,the superhero outfit maker. He was able to analyze the suit and different blood types on Omni-man’s suit and figured out that due to the blood on his knuckles being on his suit the longest that it was in fact Omni-man who threw the first punch, which in turn Debbie’s suspicions were 100% right. Unfortunately, while Debbie was at Art’s being a master detective, Omni-Man was outside in the sky hovering over Art’s place, using his super hearing to listen to everything. After Debbie left, Omni-man does visit Art with some beers and has an intimidating conversation about trust and friendship. I was honestly waiting for him to just kill Art but thankfully he didn’t. I honestly think he didn’t because for one he is terrified of Omni-man and won’t tell a soul, and also Omni-man, in my opinion, does still consider Art a friend and knows this isn’t his fault, Debbie brought this to his doorstep. I feel Omni-Man does have a contingency if this secret does get out because he is still very calm about the matter, even though he punched a whole in his own home out of frustration. Nonetheless, the next two episodes bode to be interesting to say the least.

Now about the man of the hour, INVINCIBLE! Well how we see him through the majority of the episode as Mark. Which I love because you get to see that typical hero struggle between his actual life and his alter ego. In this episode Mark takes Amber with him on a trip with his best friend, Will. They go to a college campus where Will has a crush on this guy Rick. On this trip Mark’s relationship with Amber is tested when a student of the school is kidnapping other students and turning them into evil mindless cyborgs. Of course they begin to attack the school and Mark has to save Will from being killed by one. Whilst doing so Will discovers his best friend’s secret that he is Invincible. I thought this was interesting because until now the only other people that knew his secret were other superheroes. Besides Mark’s mom, Will is the only other person to know. And of course the episode got cliché when Amber was upset at Mark for not being around to help and thinking he was a coward who ran away, when in fact her Knight and shining armor was there the whole time. Mark does struggle with these cyborgs but inevitably does defeat them, but his true test is to win back the heart of Amber. What I like is Amber does bring up a conversation she has with Atom Eve, where Eve describes Mark to be this great guy and later Amber says she was wrong about him. When I think of it, I feel as if the show is foreshadowing a future relationship between the two hero’s because I do think Atom Eve does have feelings for Mark but respects his relationship enough to not get involved. Maybe in the last two episodes some of that might get explored and a love triangle can ensue.

This episode was just everything I wanted and flushed out characters so well. My theory of Robot making clones with the Mauler Twins so he can have a team of superheroes he controls does in fact grow in this episode. Also another theory that crossed my mind is, what if Robot wants to be human and be with Monster Girl, so he’s creating a clone of Rex and might kill off the real Rex. All theories that I really hope get answered in the final two episodes. Also Justin Roiland’s little cameo as a drunk college student was hilarious! All I saw was a young Rick from Rick and Morty. Like will Mark find out that his father murdered the original Guardians? Will Damian Darkblood return? Will Amber find Mark’s secret identity and forgive him? And what is Robots’ evil master plan? Find out on the next episode of Dragon Ball Z! Oh wait…. wrong show! Stay tuned with me for the next two weeks on Amazon Prime for the final conclusion of Invincible!